Dr. Maheshchandra Guru, a professor of Journalism at the Mysore University on, “Social Development and Media: A Buddhist Perspective.”Professor’s great respect for Buddha was asserted time and again by his numerous references to the great deeds and thoughts of Buddha. He stated that at the time of Buddha, Indian societies suffered great inequality, and absence of freedom and liberty.

Guest Lecture Series-2: “Tibet: Strategic Frontier of India”
On 29, August 2015, Lt. General PK Kamath was the guest lecture. He acknowledged that Tibet is the store house of resources. Tibet’s major rivers serve millions of people and therefore we all need to protect Tibet’s environment. He spoke of the McMohan Line, Simla accord, etc., and stressed, ‘unless Tibetan issue is resolved, China and India border question will remain forever.’The talk was followed by a Q&A session.

– a Seminar Course for B.A. (Hons) Tibetan Language and Literature 3rd year students was conducted by Dr. Lene Handberg, Educational Director of Tarab Institute International on BUDDHIST PHILOSOPY AND SCIENCE, and another session for all interested students on ANCIENT INDO-TIBETAN DREAM WISDOM AND EMOTIONAL FREEDOM. These lectures were both insightful and pragmatic.

Education excursions
The second years visited private colleges of repute. The On August 27, 2015, BA and B. Com students went to St. Joseph’s Colleges, Bangalore. Students had the chance to sit in classes, interact with students, tour the campus, and play a friendly football match; St. Joseph has been in the education service for 123 years. These were truly learning moments. They were a great host.
The Tibetan Department students went to Hunsur, Gyurmey monastery. A student remarked that it was very happy and joyful experience to exchange idea and thoughts. They discussed the importance of culture and language and debated on “younger generation’s responsibility”. THE TIBETAN DEPARTMENT EDUCATION EXCURSION REPORT IN TIBETAN

Parties Go on For the Freshers
The Student Council organized the Fresher’s welcome party on August 22, 2015. It was awesome. However, a couple of events this week showed that the 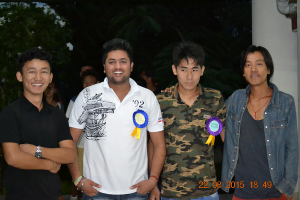 parties are still here for the freshers.
On 29th August 2015, the girl’s hostel organized a fresher’s party. The party was much enjoyed by both the old and the new members of the hostel.
Students of Political Science held their Fresher’s Party on Sunday, August 30 to welcome the new political science to what they call as their “Political Science Family”.
Reported by: LobsangTashi, Dickyi Palmo and Lobsang Norbu (B.A- Journalism)